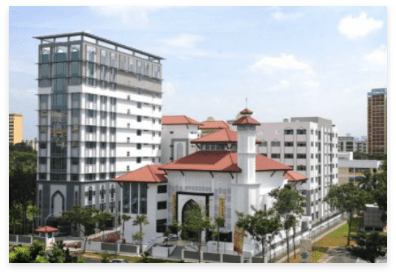 Originally built in 1859, this mosque with its unique architecture was renamed after one of the two trustees of the Dunlop Street Mosque Wakaf, Shaik Abdul Gafoor bin Shaik Hyder. Built with an unabashed mélange of styles – a mix of Southern Indian, Moghul and Europeans influences – it has since been redeveloped (re-opened in 1998) with a capacity of 3,000 and offers madrasah classes in Tamil besides its usual religious classes. The mosque was gazetted as a National Monument on 5 July 1979.